We want to support every person and family affected by missing. You can help us achieve this.

A person goes missing every 90 seconds in the UK, that means by the time you have finished reading this page there will be heartbreak for another family.

By taking part, your fundraising effort will mean something for every single one of these people.

By committing to raise £90 – you could help us reunite a family.

£90 will launch a publicity campaign to find a missing person and provide hope to families affected. 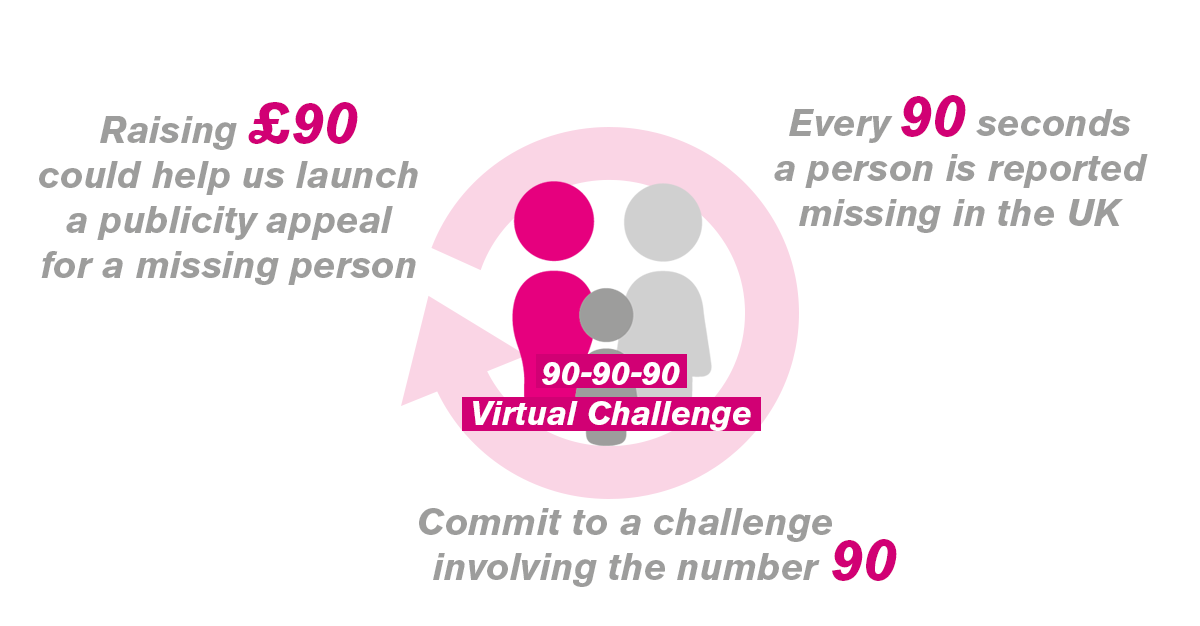 Take part in our 90-90-90 virtual challenge and help support people in crisis.

How can I get involved?

To support missing people and their families left behind, your challenge could involve running, cycling, swimming, dancing, push-ups or a combination of all of these. 90-90-90 Virtual Challenge is open to any age, any ability and can be achieved anywhere.

Whether you run 90 miles or run for 90 minutes, it’s important to recognise you are looking after your own health and mental wellbeing, whilst also raising money to support those affected by missing.

Once you’re signed up remember to nominate a friend, family member or colleague to also get involved.

Here’s how you can get involved and it’s completely FREE!

Make a difference and support families affected by missing.

On completion of your challenge and reaching the minimum £90 fundraising target, share this with our JustGiving Community page and provide evidence by emailing Supporters@missingpeople.org.uk

You will then receive your 90-90-90 Virtual Challenge certificate.

If you have a question and it wasn’t answered on this page, check our 90-90-90 frequently asked questions below!

Up to 80% of adults that go missing every year have mental health problems. They are at high risk of homelessness and harm, even while away for a short period. This problem worsens the longer someone is missing.

This highlights the importance of keeping a check on your mental wellbeing. Getting involved in a challenge like 90-90-90 can help to keep you motivated and healthy, whilst also raising great awareness for the charity and showing your support towards people affected by missing.

Any cookies that may not be particularly necessary for the website to function and is used specifically to collect user personal data via analytics, ads, other embedded contents are termed as non-necessary cookies. It is mandatory to procure user consent prior to running these cookies on your website.

Undefined cookies are those that are being analyzed and have not been classified into a category as yet.

Advertisement cookies are used to provide visitors with relevant ads and marketing campaigns. These cookies track visitors across websites and collect information to provide customized ads.

Performance cookies are used to understand and analyze the key performance indexes of the website which helps in delivering a better user experience for the visitors.

Analytical cookies are used to understand how visitors interact with the website. These cookies help provide information on metrics the number of visitors, bounce rate, traffic source, etc.