Thank you to the drama group from De Lacy Academy for their recent performance of ‘Missing Marcie’!

A few months ago De Lacy Academy, a secondary school in Knottingley, West Yorkshire contacted us about their upcoming school play. The drama club were preparing a performance about a girl who goes missing. The group got in touch because the students were very interested in the issue of missing and wanted us to help them raise awareness. We were delighted to hear about their interest in the cause because it’s important to start these conversations in schools.

On Tuesday 19th July 2022, the drama group performed ‘Missing Marcie’ to staff and parents. They did a fantastic job! The play began with real-life statistics about missing people and homelessness to emphasise the number of people affected by these issues in the UK.

The story follows a girl called Marcie and her family. The audience gets an insight into the heart-breaking trauma families have to go through when someone goes missing. During the play, the family is working closely with the police and trying to figure out why Marcie would suddenly disappear.

The performance received lots of positive praise from staff and parents. They were not only impressed with the quality of the performance itself but also the level of maturity and dedication the group showed to ensure every audience member understood the importance of our charity.

At the end of the performance, the students were by the doors with buckets collecting donations as the audience left. As well as raising awareness of Missing People, the drama group hosted a bake sale to raise funds for us.

The group baked dozens of cakes to sell and donated raffle prizes too. 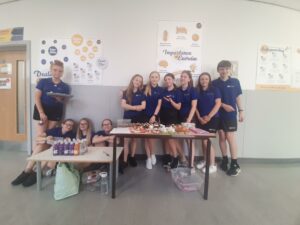 “When we first created a story about a missing teenager, the drama group were desperate to feel a connection with the character. Missing People (especially Zoe) have given us that connection as we saw first-hand the work they do to reunite families. I’m incredibly proud of my little drama group for their commitment to raising funds to make a big difference. They’ve all baked dozens of cakes to sell, stayed up late learning lines and were still in school at 7 pm on the hottest day of the year to share their performance of Missing Marcie to a paying audience. “

“It has been a pleasure to work with De Lacy Academy these past few months. During our conversations, the students were always very engaged and keen to learn more about missing and our work. Thanks to their performance of ‘Missing Marcie’, they have raised an incredible amount to fund our services and kickstarted important conversations about the issue of missing. We are so grateful for their fantastic support!

In total, De Lacy Academy raised £220 for Missing People. We are so grateful for their support! This money will make a genuine difference to anyone affected by someone going missing.

We have launched a new email communication so that you can be aware of new missing person appeals and share them far and wide! We are also calling on all Heroes to be the eyes and ears for Missing People on the ground. Your sighting of a missing person could make a difference in a crucial time.