It is with great sadness that trustees, staff and volunteers at the charity Missing People share the news of the death of our Founder, Mary Asprey OBE on Sunday 28 February 2021.

With her sister Janet Newman OBE, who died in June 2016, Mary founded the charity Missing People (then the National Missing Person’s Helpline) in response to the 1986 disappearance of estate agent Suzy Lamplugh. Together they launched a free helpline for missing people and their families, leading a team of dedicated volunteers in creating what remains the only charity of its kind in the UK.

Mary’s commitment to the cause she championed saw it registered as a charity in 1993. The fledgling charity was bolstered by early and ongoing support from Sir Trevor McDonald, HRH, The Duchess of Gloucester GCVO, John Stapleton and Alastair Stewart OBE as well as a visit from Diana, Princess of Wales.

“Mary, together with her sister Janet, leave a great legacy. I was honoured to be Patron of the Charity from the early days and saw it blossom as they worked tirelessly and with true passion and dedication to establish a national service for missing people and families left behind.” 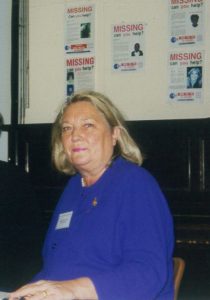 The ethos and the heart of the charity continues to reflect their founding vision. The sisters were recipients of OBEs in 1996, recognising their selfless dedication and determination for some of the most vulnerable people in our society.

Mary and Janet stepped down from their official roles at Missing People in 2004 and they have continued to be part of it at charity events and in key moments.

“Mary and Janet have left a powerful legacy for the missing person’s community. Every member of the charity continues to deliver the mission that the sisters started – of being a lifeline when someone disappears. Their spirit and passion touched so many lives, in so many ways. They always supported me in my leadership of the charity, and I was always so appreciative of that special support. I will miss them both”

The thoughts and condolences of everyone at Missing People are with Mary’s friends – many of them former colleagues and her family.

Click here to donate to Missing People in memory of Mary.

We have launched a new email communication so that you can be aware of new missing person appeals and share them far and wide! We are also calling on all Heroes to be the eyes and ears for Missing People on the ground. Your sighting of a missing person could make a difference in a crucial time.